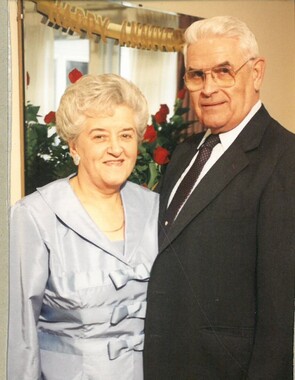 Back to Wilma's story

TERRE HAUTE - Wilma Lorette Lammey, 96, of Terre Haute, passed away December 7th, 2019 at Meadows Manor East. She was born on August 6th, 1923, in Paris, IL, to Verner and Marietta (Forsythe) Parrish. She graduated from Paris High School in 1940 and attended Brown's Business College in Terre Haute in 1941. She was employed at Quaker Maid as a secretary in the Purchasing Department.
She married Bert Lammey on December 23rd, 1943 and moved to various places due to his military service. When Bert was sent to Japan, Wilma returned to Terre Haute and worked as a secretary for the Home Service Department of the Red Cross. She was active in Girl Scouts and in the building of Camp Wabashi. She was a member of the Northside Church of Christ for over 65 years.
She is survived by two children, Michael Lammey (Barb) of Terre Haute, and Lorette Semon and husband, Tom, of Holly Springs, NC; grandchildren Bart Lammey and wife, Janet, of Normal, IL, Bond Lammey of Washington, DC, Trisha Washington and husband, Troy, of Indianapolis, IN, Kelsie Carlisle and husband, Tyler, of Raleigh, NC, and Kyle Semon and wife, Anna, of Raleigh, NC; great-grandchildren Kate and George Lammey of Normal, IL, and Grant Washington of Indianapolis, IN; and several cousins, nieces and nephews.
She was preceded in death by her husband, parents; and 2 brothers, Hall and Laufman Parrish, both of Paris, IL.
Visitation will be from 6 to 8 P.M. on Friday, December 13th, at Roselawn Funeral Home, 7500 N. Clinton St., Terre Haute, IN. Services will be at 2 P.M. on Saturday, December 14th, at Roselawn, with visitation beginning a 1 P.M. Mike Ferris will officiate. There will be no graveside service. In lieu of flowers, donations to the Northside Church of Christ or to Camp Wabashi would be appreciated.
www.roselawnfuneralhome.net
Published on December 9, 2019
To plant a tree in memory of Wilma Lorette Lammey, please visit Tribute Store.

Plant a tree in memory
of Wilma

Mabel Morris
Lorette, So sorry to hear of your mother’s passing. I was just telling Hannah stories of when we used to all go shopping together. I know she will be missed. I have commitments today and Saturday, otherwise I would be there. God bless you and your family. You are in my prayers.
Kelly McGoffney
May Sister Lammey, Rest in Peace. She will be missed.
View all