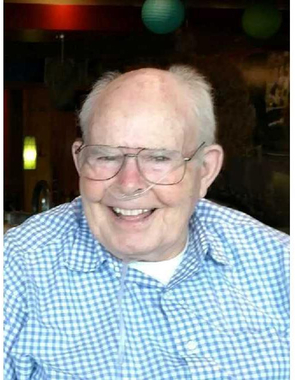 Back to William's story

William Riley McKeen IV, 90, of Bloomington, died December 11, 2019 at Meadowood Retirement Community, where he had lived the last four years.
Born Feb. 22, 1929, in Terre Haute, Indiana, Riley was the son of William Riley McKeen III and Henrietta Gilchrist McKeen. He graduated in 1946 from Terre Haute's Wiley High School. In 1946, Riley served as 2nd Lieutenant in the Army Reserve Officers' Training Corps in Seoul, South Korea. With a military deferment he attended Rose Polytechnic Institute - now Rose-Hulman Institute of Technology - where he graduated with a bachelor's degree in mechanical engineering in 1951. He completed his service as 1st Lieutenant Corp of Engineers, U.S. Army, and was honorably discharged on July 27, 1951.
He married Betty Lou Valentine on March 25, 1955 in Terre Haute, Indiana. Riley and Betty made their home in Bedford, where they raised three children and their home served as a warm gathering place for celebrations with family and friends.
Riley retired Jan. 28, 1988, after 30 years of service with the Naval Surface Warfare Center, Crane Division, Indiana, as a division manager.
He'll be remembered for his many home additions and improvements, family vacations, fondness for fishing and hunting and yearly trips with close friends and family to the Indianapolis 500.
Riley is survived by his sister, Virginia Gilchrist McKeen Blose, of Scottsdale, Arizona; daughters Candice McKing of Bloomington, Frederika Shawgo (Ron) of Fort Wayne, son William Riley McKeen V (Nancy) of Bloomington; eleven grandchildren and eight great-grandchildren.
He was preceded in death by his wife, his parents, and a son-in-law, David McKing.
A visitation and memorial service will be held at Meadowood Health Pavilion on Wednesday, Dec. 18, 4-8 p.m. Flowers may be delivered to Meadowood Health Pavilion, 2455 Tamarack Trail, Bloomington, Indiana 47408. A chapel service with military honors will be held at Highland Lawn Cemetery in Terre Haute on Dec. 19, 2019 at noon.
Online condolences may be left for the family at www.DayDeremiahFrye.com
Published on December 13, 2019
To plant a tree in memory of William Riley McKeen, please visit Tribute Store.

Plant a tree in memory
of William

A place to share condolences and memories.
The guestbook expires on March 12, 2020.