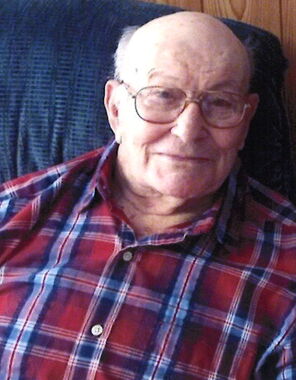 Back to Earl's story

CLAY CITY - Earl R. Yegerlehner, 97, of Clay City, passed away January 11, 2020 at 6:55am at the Cloverleaf Healthcare Facility. He had been a resident there just this past year.
Earl was born August 11, 1922 in Clay County, the son of Samuel Yegerlehner and Esther Zurcher Yegerlehner.
He graduated from Clay City High School, class of 1940. While still in high school, he began farm work with a team of horses. At dawn he would gather and shuck corn, filling his wagon before and after school. Farming has always been a part of Earl's life. In years past dairy cows, beef cattle, chickens and pigs were on the farm, as well as corn, beans, wheat, oats, and hay.
Earl was united in marriage to Imogene Brown Yegerlehner on August 15, 1943. Together they raised their family on the farm and worked together in the garden and whatever needed to be done.
They were active members of St. Peter's Evangelical and Reformed Church, which later became First United Church of Christ. Earl served in many capacities at the church, including trustee, deacon, and elder. He was a valued member.
Earl enjoyed music and for several years sang in a quartet. He was a member of the Rural Youth Group and later was a Farm Bureau member, and served on the County Extension Board, the 4-H Council, and the advisory board for the Clay City High School FFA.
He is survived by his children, Mary Alice Sharp and husband Larry of Seymour, Donald Lee Yegerlehner and wife Janice of Clay City, Ruthann Mishler and husband Jim of Brazil, and Jeanne Kay Barnett and husband Dean of Portland, OR; grandchildren, Michael Sharp (Ginie), Terry Sharp (Bridget), Heidi Seldomridge (Kevin), Eric Yegerlehner (Jill), Laura Eves (Mark), Krista Lavonas (Eric), Bret Mishler (Lorre), Rachelle Stefanski (Angela), and Samuel Barnett (Katie); 23 great-grandchildren; and a large extended family.
He was preceded in death by his wife of 73 years, Imogene Yegerlehner, January 8, 2017; his parents; a brother, Ralph John in infancy; and brother, Paul Yegerlehner.
Services will be held Saturday, January 18, 2020 at 1:00pm at First United Church of Christ, 6414 S. County Road 300E, Clay City, IN 47841, with Pastor Bob Wilkins officiating. Burial will follow at St. Peter's Cemetery. Visitation will be Friday from 4 to 8pm at the church, and again Saturday at 12pm until time of service. In lieu of flowers, donations may be made to the church.
Post a note of condolence at:
www.schoppenhorstfuneralhome.com
Published on January 14, 2020
To send flowers to the family of Earl Robert Yegerlehner, please visit Tribute Store.

Send flowers
in memory of Earl