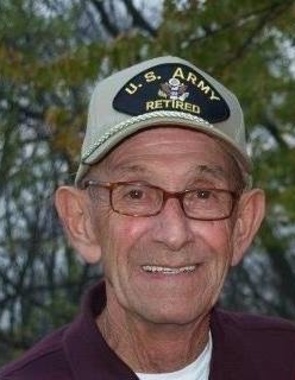 Back to Dallas's story

Dallas W. Goodwin 79 of Terre Haute, IN went to be with the Lord at 9:55 p.m. on Monday, December 2, 2019 at Terre Haute Regional Hospital with his children and some grandchildren at his bedside.
Dallas was born August 4,1940 in New Goshen, IN, the son of Harrison and Mame Goodwin. He was married to Virigia (Ginny) A Vail on March 8, 1963.
He graduated from Fayette High School in 1958. After high school he spent 3 years serving in the United States Air Force. Later in 1983 he joined the Indiana Army National Guard and retired in 2000 at the rank of E7/SFC. He worked at Wabash Fibre Box for more that 25 years where he retired from. After retiring he and Ginny enjoyed spending time with their grandchildren and traveling around the United States.
He was a member of the American Legion Post, Riley, IN. He and Ginny had been members of the American Rabbit Breeders Association and other groups while raising rabbits as a hobby. He spent many hours hunting and fishing with his sons and grandchildren over the years. He had a wonderful smile and a huge heart, he didn't know a stranger. He was always willing to help those in need.
He is survived by his sister Joyce Worley and husband Fred of Independence, MO; sons Jeffrey Goodwin and wife Dana of Terre Haute, Greg Goodwin and wife Frances of Tipp City, OH; daughter Shawn Harmeson and husband Todd of Pendleton, IN; grandchildren Ashley Poff and husband Tony, Alyssa Lane and husband Brandon, Alaina Beaver and husband Tyler, Brent Goodwin and fiancé Kaytlyn Smith, Sarah Goodwin, Jordan Harmeson, Jacob Harmeson, Justin Harmeson, LeeAnn Goodwin and Shepherd Goodwin; and great-grandchildren Tommas Poff, Rylee Lane, Bryson Lane and Spencer Goodwin.
He was preceded in death by his parents; brothers Harold Goodwin, Robert Goodwin, Richard Goodwin, Ronald Goodwin, James Goodwin, Wallace Goodwin and Larry Goodwin; sister Bertha Nichols; wife Virginia Goodwin; grandson Dominique Goodwin and granddaughter Piper Goodwin.
Family has opted for cremation and will have a graveside memorial service Memorial weekend May 2020 with burial at Pleasantview Cemetery in Tecumseh, IN.
Published on December 5, 2019
To plant a tree in memory of Dallas W. Goodwin, please visit Tribute Store.

Plant a tree in memory
of Dallas

A place to share condolences and memories.
The guestbook expires on March 04, 2020.

Joyce Michelle Nichols Weston
I will have you in my heart and love you forever uncle Dallas my prayers are with you all.
Mike Cahill
Just learned about Dallas's passing today. My deepest regrets.
God bless all of his family.

I remember the first time I met Dallas and Ginnie. He always had a smile and you could hear the laughter in his voice. May his wonderful memories give you comfort in this time of sorrow... Sending hugs and prayers to you all..RIP Dallas. We will miss you!!

Dallas was always such a pleasure to communicate with. Always cheer & fun; never a harsh word. I will miss him !

Holly Turner-Henn
Prayers to all the Goodwin family. I truly enjoyed serving with SFC Goodwin. ❣️🇺🇸❣️
David Piper
I am sorry for the Goodwin’s family. Dallas was a good person. I had a lot of good times serving with him. 🇺🇸🙏
Carol Hubert (Soat)
My love and prayers to the entire family in this time of sorrow.
Pat & Patti West
Dallas left us with many special memories here at Stanberry Lake. Our thoughts and prayers go out to his family.
Bill Latta
What a great guy. He made everyone feel special when he talked to them. I was proud to have served with and call Dallas a friend.
Jayne lee
Sorry for your loss, He will be missed by many and always great memories!
Mary Ann Sedletzeck
Dallas and Virginia or very very special people to us! I enjoyed visiting with him at the 100th anniversary show for the American checkered giant in Terre Haute in May of this year. I know he got to visit with Gordon Halsey and many other of our rabbit family friends. He always had a smile and he always made me laugh he was truly a one-of-a-kind person and I will miss him desperately.my thoughts and prayers are with Jeff and Greg and the entire Goodwin family he holds a special place in my heart
View all