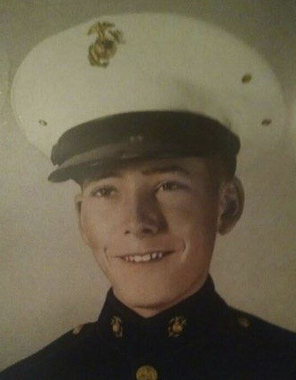 Back to Clarence's story

Clarence Ervin "Buddy" Fuller, 83, passed away December 12, 2019 in Terre Haute Regional Hospital. He was born December 12, 1936 in Little Rock, Arkansas to Denver Ervin Fuller and Flossie Mae Caldwell Fuller Johnson.
Buddy bravely served his country in the United States Marine Corps during the Korean War while stationed in Guam. He had a passion for cars, and worked in the automotive industry for over 40 years in sales and service, primarily in Arkansas and Louisiana.
Buddy enjoyed fishing, woodworking, horse racing, watching football and WWE. He was a die-hard Arkansas Razorbacks and New Orleans Saints fan. Buddy was incredibly creative; he enjoyed crafting board games, lamps, porch swings, rocking chairs, lamps, squirrel feeders, and so much more. He loved spending time with his family and friends, and enjoyed visiting over a cold brew, and his favorite brand of beer was Miller Lite.
He was a rough and tough Marine, but he had a tender heart and an incredible soft spot, especially for his grandchildren and great-grandchildren. He loved and missed his Arkansas roots, where he always felt most at peace. His family and friends will miss his incredibly witty sense of humor, talking about football and cars, watching him light up as he showed his woodworking projects, telling stories, and heartily enjoying huge helpings of fried catfish and shrimp.
He is preceded in death by his father, mother, and stepfather, Albert Johnson, his two brothers, four sisters, two step-brothers, and one step-sister.
He is survived by his loving wife of 62 years, Ann Fuller, his son, John Fuller and daughter-in-law, Jane, grandchildren; Amanda Nicole Fuller-Snow, and Johnathon "Lee" Fuller II, great grandchildren; Hunter Michael Simpson, Madison Elizabeth Simpson, Noah Christopher Snow, Payton Danielle Snow, and Hayden Elizabeth Fuller, along with many nieces and nephews--all of whom meant the world to him.
A visitation is scheduled in Greiner Funeral Home, 2005 North 13th St., Terre Haute, Indiana, 47804 from 4 p.m. until 5 p.m. on Monday December 16, 2019. In lieu of flowers, the family is asking for donations to be made to the Sullivan High School Choir Department, 902 North Section St., Sullivan, Indiana, 47882. Online condolences can be made at:
www.greinerfuneralhome.com
Published on December 14, 2019
To plant a tree in memory of Clarence Ervin Fuller, please visit Tribute Store.

Plant a tree in memory
of Clarence

A place to share condolences and memories.
The guestbook expires on March 13, 2020.